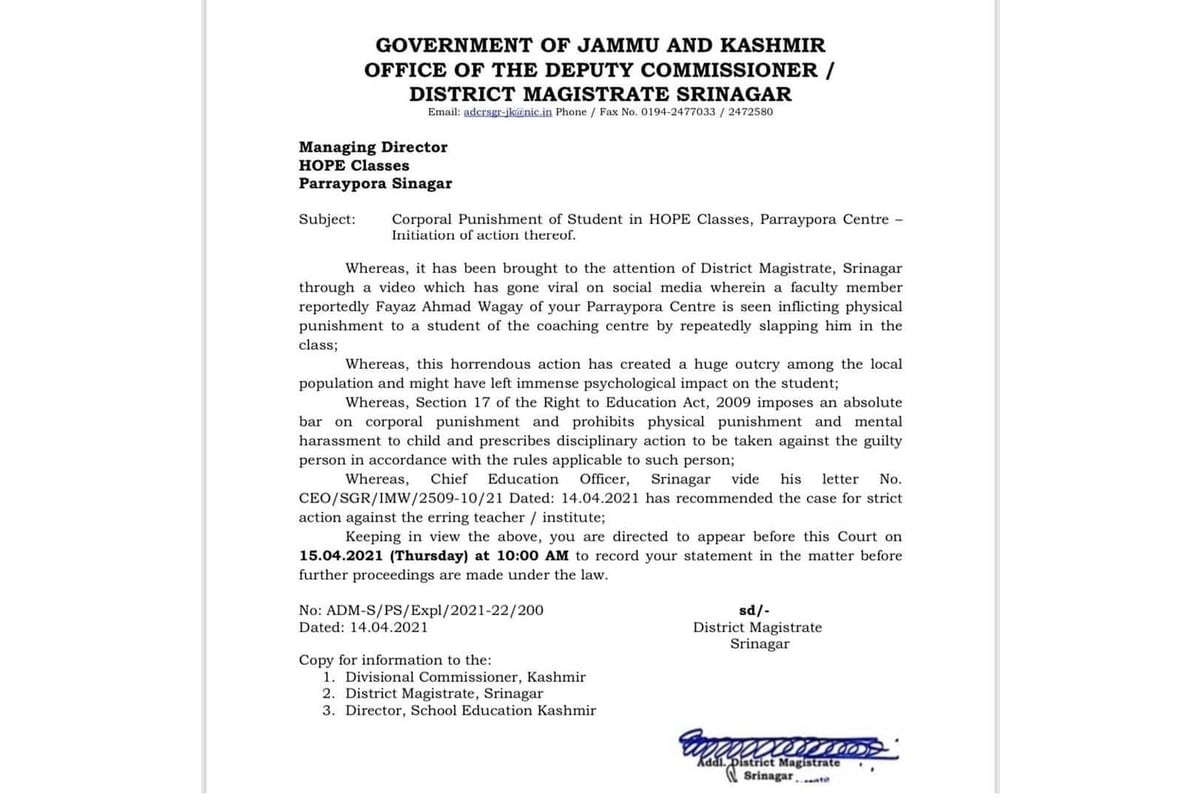 Two recent and widely viewed videos that underscore the contrasting natures of various student-teacher relationships have evoked a torrent of responses from social media users in Kashmir. One clip has led to the arrest of a teacher. In the first video, a teacher and a group of young girl students put up a dazzling song-and-dance show to bid farewell to their school principal on his superannuation. In the second, a terrified teenage student is repeatedly slapped by his tutor for apparently disobeying his instructions. The offending teacher has now been arrested after public anger on social media forced officials to act.

The first video, shot and uploaded on social media apparently by the invitees at the Bumhama Middle School in Kupwara, drew both criticism and applause from social media users.

Led by Abdul Rashid Mir, the physical education teacher of the school, small girls in hijab enacted the popular 1993 Bollywood song, “Sir, sir, we love you”, in appreciation of the work done by school principal Taimoor Ahmad Shah. The audience included local officers, village elders, teachers and parents. Mir, a young man dressed in a black suit, shook a leg with the girls, even as music played through the loudspeaker. Soon the girls sprayed confetti in the air and garlanded Shah profusely. ”It was a tearful send-off by the students. The entire village was crying when I stood up to leave,” Shah told News18 over the phone from Kupwara. “I have worked for the past 34 years and wherever I have gone, I have received support and respect.”

Mir said it was the initiative of students and teachers to fete the principal. “His contributions in village education for entire Kupwara are huge,” he said. “Those critical of the small girls putting up a show should understand this was their love and affection to their teacher.”

Hours after the video was uploaded on social media platforms, many netizens criticised Mir and the school management, saying they were spreading “waywardness and promiscuity by encouraging young girls to dance in front of strangers”. Others, however, maintained it was a cute gesture shown by the students to their teacher.

Shah said he felt very sad when friends told him that some social media users were reacting in a negative way. “I was bitter. At first, I thought why were people reacting in such a way. But then I thought, let it be. I cannot change them. The next day I drove the kids and teachers to the Tulip Garden in Srinagar at my own expense. That was the best way to deflect needless criticism,” he said.

Kashmir’s vocal social media users were enraged over the other video in which a teacher at a tuition centre can be seen thrashing a student in full view of a classroom. “Who gave you the permission?” roars the teacher, while slapping the teenager multiple times.

As the video went viral on Wednesday night, Kashmir Twitteratti flayed the teacher, some even using profanities against him.

“This Brutality by Fayaz Ahmad Zewali who happens to teach chemistry at Hope classes parraypora is Unacceptable. How can a teacher be abusive like this? This is insane,” Nasir Khuehami, a student leader, wrote on the microblogging site.

The angry responses on Twitter and Facebook, especially calls for action, prompted the Srinagar district magistrate to initiate an inquiry into the incident.

On Thursday, the DM’s court recorded statements of the management of the private tuition centre, the teacher and the assaulted student in connection with the contents of the video.

An official said the teacher has been arrested and charges would be pressed against him.

It could not be ascertained what the teacher has to say in his defence.