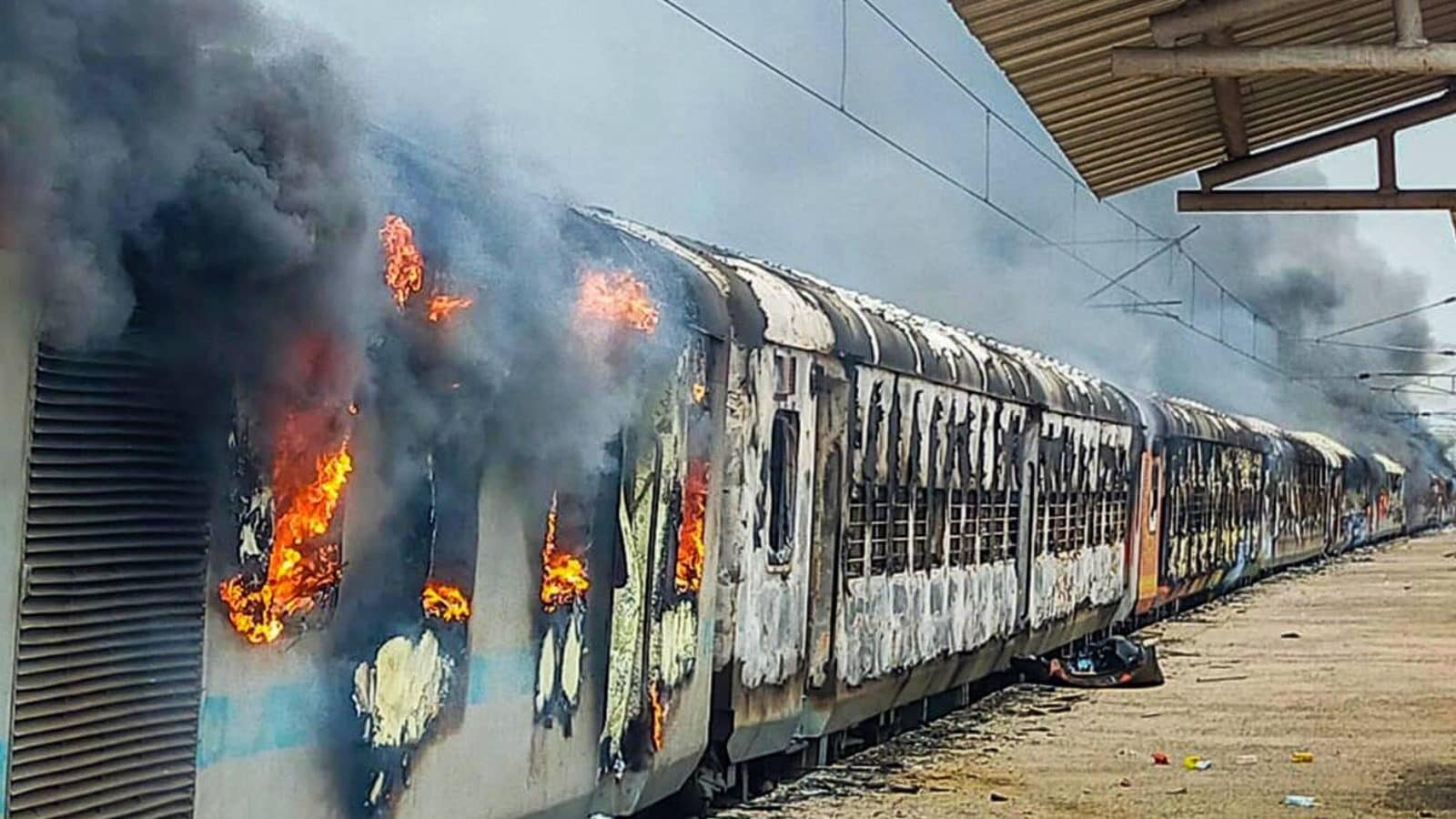 Protests against Agnipath’ left Bihar in flames on Friday when rampaging mobs set fire to dozens of railway coaches, engines, and stations and torched BJP offices, vehicles, and other property, prompting the police to suspend internet services for nearly a third of the state. Leaders of the BJP, which rules the Centre and shares power in the state, were at the receiving end on the third consecutive day of protests when the escalation of violence included attacks on the houses of Deputy Chief Minister Renu Devi and the party’s state president Sanjay Jaiswal and the car of MLA Vinay Bihari.

According to ADG, Law and Order, Sanjay Singh, the number of arrests made in connection with the protests against the new scheme of recruitment in the armed forces has now reached 320, up from 125 on the previous day. The number of FIRs registered in connection with these incidents now stood at 60, two and a half times the previous day’s figure. As a precautionary measure, we have suspended internet services in 12 out of 38 districts in the state which have been identified as the worst affected ones, Singh told PTI.

The East Central Railway zone, which is headquartered at Hajipur, said the number of railway coaches set afire by the mobs was more than 60, in addition to 10 engines. The burnt coaches included practically the entire rake of Bhagalpur-bound Vikramshila Express coming from Anand Vihar Terminus which was attacked at Lakhisarai station.

Railway sources and the Lakhisarai administration asserted that all passengers had alighted and nobody suffered burn injuries though unconfirmed reports said that one of them suffered a shock and died soon after alighting. The disturbances resulted in a major security crisis, forcing the cancellation of 214 express/mail/passenger trains and short-termination of another 78, ECR Chief Public Relations Officer Virendra Kumar said in a statement.

The CPRO shared pictures of passengers stranded at various stations where railway personnel offered them refreshments during the uncertain wait for the trains they intended to board. He, however, added that normalcy was restored around 5 P.M. He also mentioned heavy damage to railway property across the state, including a station in Bettiah, the town where Pashchim Champaran district is headquartered and where the houses of Renu Devi and Sanjay Jaiswal are also located.

Both the Deputy CM and the state BJP chief alleged conspiracy and involvement of opposition-sponsored goons for the disturbances in their town, adjoining Motihari where Vinay Bihari’s car was vandalized, and other parts of Bihar. The party’s offices were set afire in at least Madhepura and Sasaram. BJP leaders had to take the heat on Thursday too when the party’s office in Nawada was set afire and its MLA Aruna Devi sustained injuries in a stone-pelting incident.

The party’s ally, Chief Minister Nitish Kumar’s JD(U), grimly asked the Narendra Modi government to assuage those who feel aggrieved by the new system of four-year employment followed by discharge from service without pensions. An appeal to this effect was made by JD(U) national president Rajiv Ranjan Singh alias Lalan in a video statement. The Chief Minister’s bete noire Chirag Paswan also said I yesterday wrote a letter to the Defence Minister seeking a review of the new scheme. Tomorrow I will meet the governor and submit a memorandum demanding an immediate rollback. The RJD-led Grand Alliance, meanwhile, announced its support for the Bihar bandh called by young army aspirants tomorrow.

An announcement to this effect was made by state RJD chief Jagadanand Singh, whose party’s strong-arm tactics at such agitations are viewed with trepidation by the people of the state. The Bihar Congress, an old but now estranged ally of the RJD, also issued a statement announcing its support for the bandh.

The Modi government had promised employment. Agnipath is less about employment and more about retirement at a young age sepoy ranks of the armed forces draw their manpower from almost every village in the country. The magnitude of the protest will surpass all movements that have taken place since Modi came to power, warned Sandeep Saurav, an MLA of the CPI(ML) who is also the national general secretary of the party’s student wing AISA.