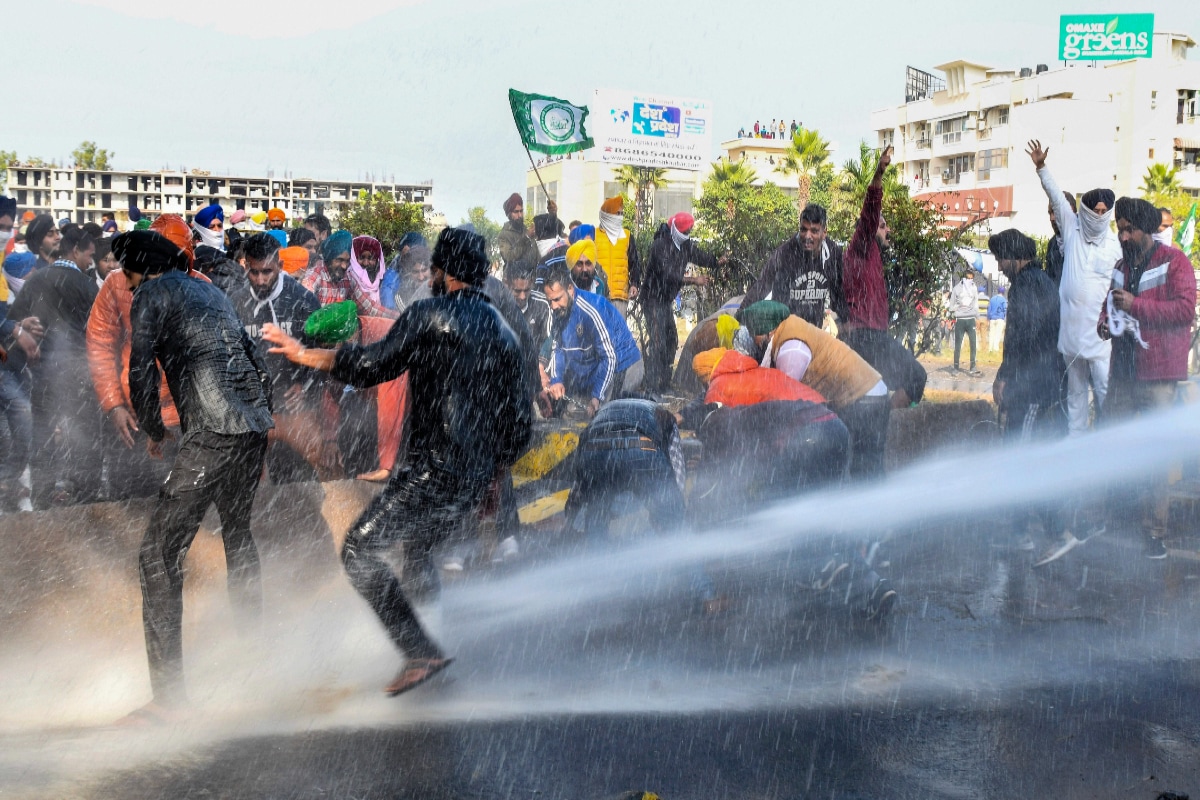 After facing tear gas, water cannons and clashing with security personnel, hundreds of farmers entered the national capital on Friday to hold peaceful protest at a north Delhi ground, but there were still thousands at border points who were undecided to go to the identified demonstration site and a clarity in their decision is expected on Saturday. Around 600 farmers protesting against the Centre’s new farm laws headed to Sant Nirankari Ground, one of the biggest in the national capital, following several hours of confrontation with the police at different border points with Haryana.

After a meeting between farmer leaders and senior police officers, the Delhi Police allowed protesters to hold demonstration peacefully at Nirankari Ground, but senior farmer leader Darshan Pal later said they would stay put at border points on Friday night and a decision on whether to go to the identified protest site or not will be taken on Saturday. At the Tikri border, some groups of farmers were escorted by police personnel around 3 pm amid tight security and taken towards the identified protest site. But those gathered at the Singhu border, one of the main routes used to access the city from Punjab, had not entered the city till late evening.

Carrying flags and shouting slogans, thousands of farmers gathered at various entry points into the national capital in a determined bid to push their way through as part of their ‘Delhi Chalo’ march while police blocked them with barricades, tear gas shells and batons. Earlier in the day, protesting farmers at the Delhi-Haryana Singhu border pelted stones and broke barricades as they clashed with the Delhi Police which used tear gas shells to disperse them. The security personnel used lathi-charge against the protesters for a brief time. Around three police officials were also injured.

Angry farmers, who were denied entry into the national capital for their ‘Delhi Chalo’ march against the farm laws, managed to break the first layer of barricading, at the border. Plumes of smoke were seen as security personnel used multiple rounds of tear gas to disperse the farmers at the Singhu border.

A multi-layer barricading was in place at the Singhu border to prevent farmers from entering the national capital. At the Tigri border, security personnel used water cannons to disperse farmers trying to gain entry to Delhi.

The Aam Aadmi Party (AAP) government on Friday denied permission to the Delhi Police to convert the city’s stadiums into temporary jails in view of the protest by farmers against the new farm laws. While rejecting the police’s request, Delhi Home Minister Satyendar Jain said every Indian citizen has the constitutional right to protest peacefully for which they cannot be put in jails.

In a letter to the principal home secretary, Jain said the central government should accept the demands of the protesters and added that putting farmers in jails is not the solution. Meanwhile, Delhi Metro services resumed on all lines on Friday evening after they were disrupted for a few hours at multiple places because of the ‘Delhi Chalo’ march.

“Services normal at all corridors from 5:35 pm onwards,” the Delhi Metro Rail Corporation (DMRC) tweeted, adding that the services will be regular on all lines on Saturday. Due to protest, vehicles moved bumper-to-bumper on key roads after the Delhi Police closed several border points with Haryana in view of the protest march on Friday.

Dhansa and Jharoda Kalan borders were closed for traffic movement due to the demonstration and the commuters were asked to take an alternative route, the Delhi Traffic Police said earlier in the day. “Tikri Border is completely closed for traffic movement by local police. Traffic intending to go towards Haryana is also closed. All motorists are advised to avoid this route in view of the protest by Kishan Sangharsh committee,” it tweeted.

The police asked people to “totally avoid outer Ring Road, Mukarba Chowk, Grand Trunk Road, NH-44 and Singhu Border” as the traffic was “very very heavy in this area”. Heightened checking near the Dhaula Kuan police post led to obstruction in traffic in the carriageway from Gurgaon towards Dhaula Kuan.

Punjab farmers, representing over 30 farm bodies, had announced they would go to Delhi through several routes — Lalru, Shambhu, Patiala-Pehowa, Patran-Khanauri, Moonak-Tohana, Ratia-Fatehabad and Talwandi-Sirsa. Tension was escalating at all the border points. Farmers have assembled near the borders in tractor-trolleys laden with rations and essentials for the march. Authorities in Haryana have imposed prohibitory orders under Section 144 of the Criminal Procedure Code (CrPC) in several parts of the state to prevent assembly of the protesters.